This gorgeous house on Lake Oswego (near Portland, Oregon), was designed by my architect first-cousin-twice-removed, Ewald Theodore Pape (1894-1976), in 1936 – but it took a little while for me to verify it.  Thanks to Terry Sprague of Luxe Christie’s International Real Estate, the broker who currently has the house listed for sale; Kelley Woodwick, Anne Sjogren, and James Fugate of Fidelity National Title in Portland; and Marilyn Felipe, Steve Rauch, Linda and Laura of the Lake Oswego Public Library, I was able to figure it out. 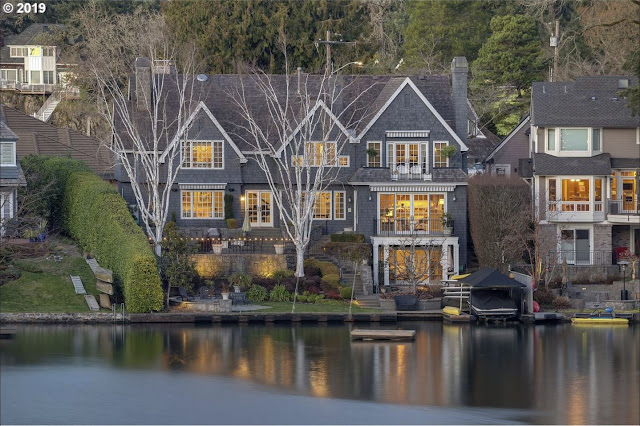 This quest started with an article in the April 12, 1936 Portland Oregonian, on page 23, entitled “Fine Residence Being Erected at Lake Oswego”:

One of the outstanding residential buildings of the year is under construction in the exclusive Lakewood drive, facing Oswego lake, for Leo J. Hanley of Cookingham & Hanley, attorneys for the Ladd estate.  Cost is estimated at $12,000.

The house, designed by E. T. Pape, occupies one of the most desirable building sites in the district.  It is of Cape Cod style.  Exterior will be of shake and stone.  It will feature four bedrooms, three baths, and basement shower and locker rooms.

Stone used in the house is from the old Oregon City courthouse and was quarried at Carver in 1884.  This stone also will be used in an 80-foot stone wall bounding the property on the lake side.

The house will be finished early in June.

The image below accompanied the article, with the additional information that the contractor was Fred Juhr. 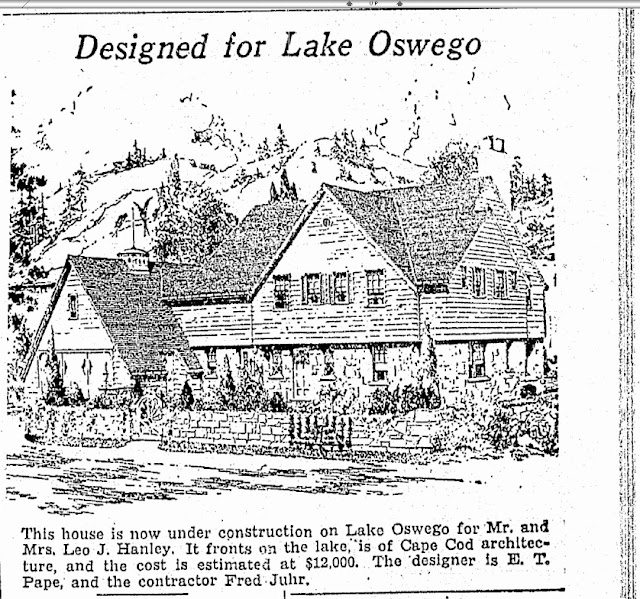 The sketch looks a lot like this photograph, doesn’t it? 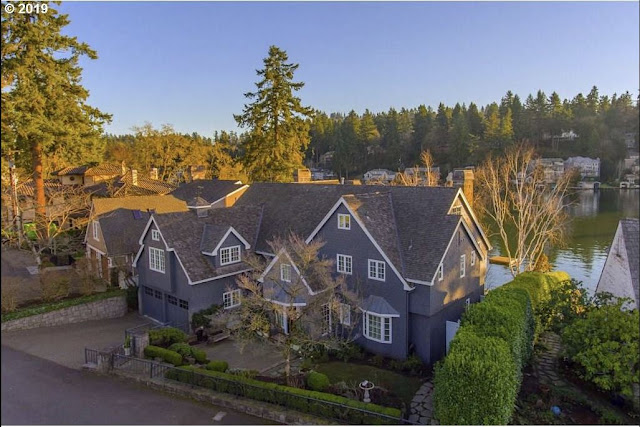 920 Westpoint, Lake Oswego, Oregon, as viewed from the air.
Photo courtesy of Terry Sprague of Luxe Christie’s International Real Estate
But I’m getting ahead of the story.  It took me a while to figure out that this was the house, because the newspaper article didn’t provide an address, and I couldn’t find any records (such as census or city directories) of Leo Hanley actually living in Lake Oswego.
All the article said was “Lakewood drive, facing Oswego lake.”  There is not a street in Lake Oswego specifically called Lakewood Drive.  However, there is a neighborhood / subdivision called Lakewood, and I decided to start my search there.  I used PortlandMaps.com to search all the waterfront lots that still had houses on them completed in 1936 or 1937 (since sometimes the year of completion listed on that site is one year after the actual completion date).  I found a number of possibilities, including a house at 920 Westpoint that, in Google Maps Street View, looked a lot like the sketch from 1936.  But that still wasn’t enough evidence.
I discovered that the City of Lake Oswego’s public library had created an online index for a couple of local newspapers.  I did a search on Hanley and came up with two articles that seemed relevant, and submitted a request through their Ask a Librarian service to get copies of the articles from microfilm.
The first article was from the July 16, 1936 Oswego Review and was called “Leo J. Hanley Residence,” with keywords “Leo Hanley house described.”  This article repeated the story about the “hewn sandstone taken from the old Clackamas court house,” noting that it was used in the first story of the house as well as walls fronting the building, terraces, and lake shore walls.  The article went on to say,

The building has fifteen rooms, among them a spacious living room, dining room, dinet [sic], kitchen, and recreation room, besides a full basement, there are five bed rooms, three baths, and closets, drawers, and shelving galore.  A highly finished three stall garage, with parking space for eight cars, has been provided.  The grounds have been beautifully designed and upwards of 2000 flowering plants and shrubs have been set out.  The home is equipped with every convenience known to science, and the site of the home is among the most romantic on the lake.

This story also mentioned Pape and Juhr, as well as the home’s location on the “shore of Lake Oswego,” but said it was on “Peninsula Drive.”  There’s no Peninsula Drive in Lake Oswego, and wasn’t in the past, according to the city’s librarians.  However, part of the Lakewood subdivision is often called “The Peninsula,” and Westpoint is located in that area.
Here is a plat of the second part of the Lakewood subdivision, from 1925, obtained from the Clackamas County Surveyor Information System (CCSIS) – click on the image to enlarge it: 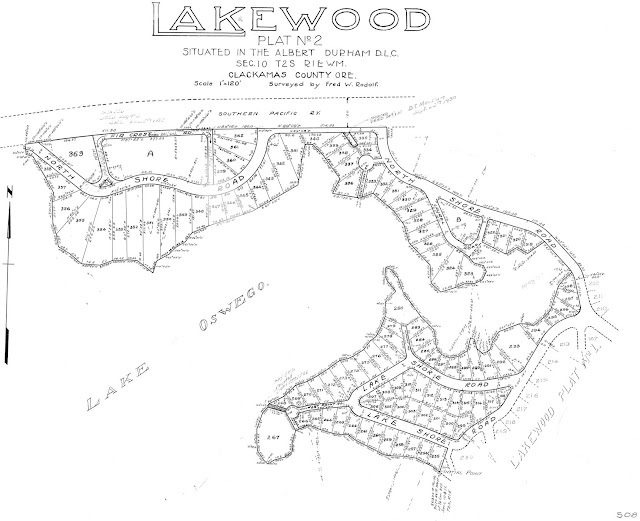 And here is an enlargement of the lower part of that plat, the peninsula, showing Westpoint Road: 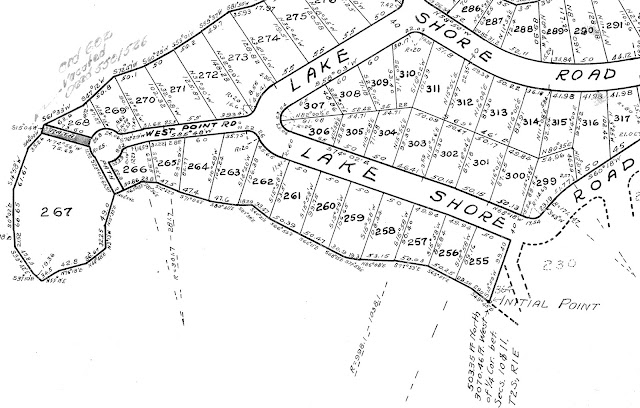 I felt 920 Westpoint might be the right house, but I still wasn’t sure.  The other article that I obtained from the Lake Oswego Public Library was called “Many Real Estate Transfers Take Place in this Vicinity,” from the August 27, 1936 Oswego Review.  Some of its keywords included the phrase “Leo Hanley House.”  It had this sentence:

The palatial home of Mr. Leo Hanley, Portland prominent attorney, has been sold to an unnamed person.  A rumor is to the effect that Mr. and Mrs. Anderson of the Anderson and Cohen Hudson auto dealers in Portland were the buyers.

I searched for an Anderson in Lake Oswego in the 1940 Census – and bingo!  William M. Anderson, co-owner of an “retail automobile store,” and family were on West Point Road – although there were no house numbers on the 1940 Census in that part of Lake Oswego, so I still wasn’t sure.
Next I searched in the Oregonian again, this time for William Anderson, and found his 1976 obituary, which gave his address as 920 West Point.  Apparently he lived there for 40 years.  His daughter, Doris Mae Soller, died in 2012 and was living in Lake Oswego at the time.  I found references to 920 Westpoint associated with her name.  I wondered if she and her family lived in the house too, perhaps after her father’s death.  I found her obituary and that of her son (who died in 2010), along with names of other relatives.
At that point, I was stuck, due to distance and lack of (free or low-cost) online access to the records I need.  I wanted to see if the home’s current ownership could be traced backwards to William Morris Anderson and wife Eva Lulu Bischoff Anderson, and even better, back to Leo James Hanley and wife Fabian Rosche Hanley.  Then I would feel more confident that Ewald Pape did in fact design this house.
So I reached out to realtor Terry Sprague, and he was very interested in helping me.  He contacted Kelley Woodwick, who in turn put Ann Sjogren on the hunt.  Ann was able to send me copies of the deeds that did trace the ownership back to Leo Hanley.  And, as I thought, Doris Anderson Soller (William’s daughter) and her husband did own the house from November 1976 to June 1986.
The house at 920 Westpoint is on lot 263 and the eastern (left-side) half of lot 264, as shown on this 1988 survey from CCSIS (click on the image to enlarge it): 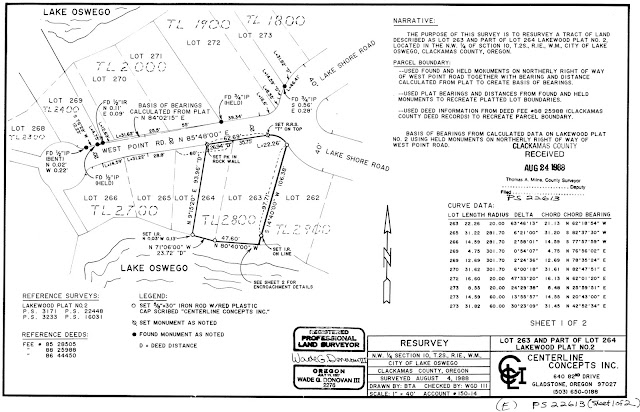 And on this topographic map, from the same 1988 survey, you can see the footprint of the house at that time (click on the image to enlarge it): 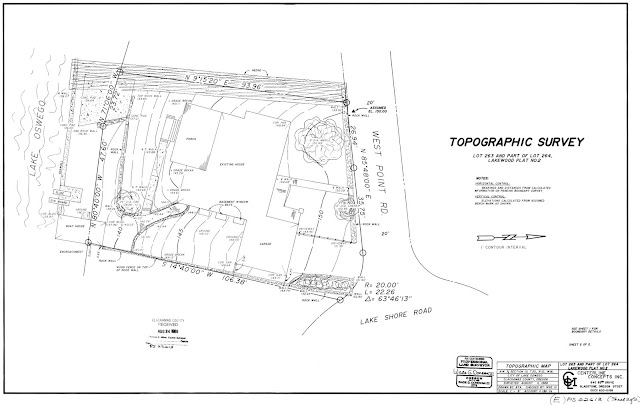 Here is a photograph of the 1884 Clackamas County Courthouse, the source of the stone used on the house and grounds: 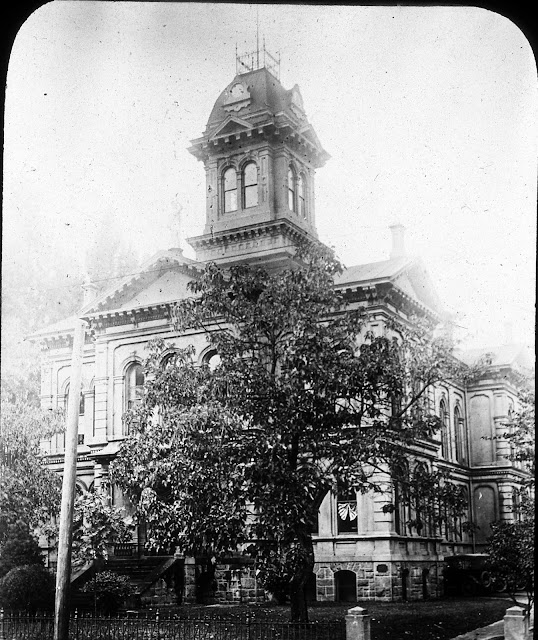 You can see the stones from the courthouse in the fence around the front of the property in the photograph below: 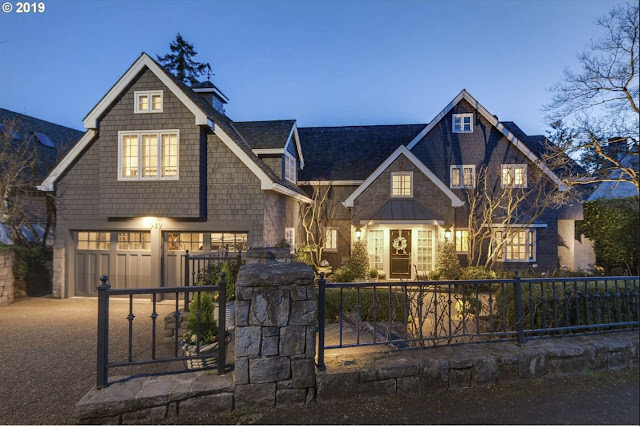 920 Westpoint, Lake Oswego, Oregon, as viewed from the street.

Check out this video of the home, which includes interior photos and more views of the exterior.

BUY / SELL YOUR HOME
MEET OUR BROKERS
VISIT CONTACT US